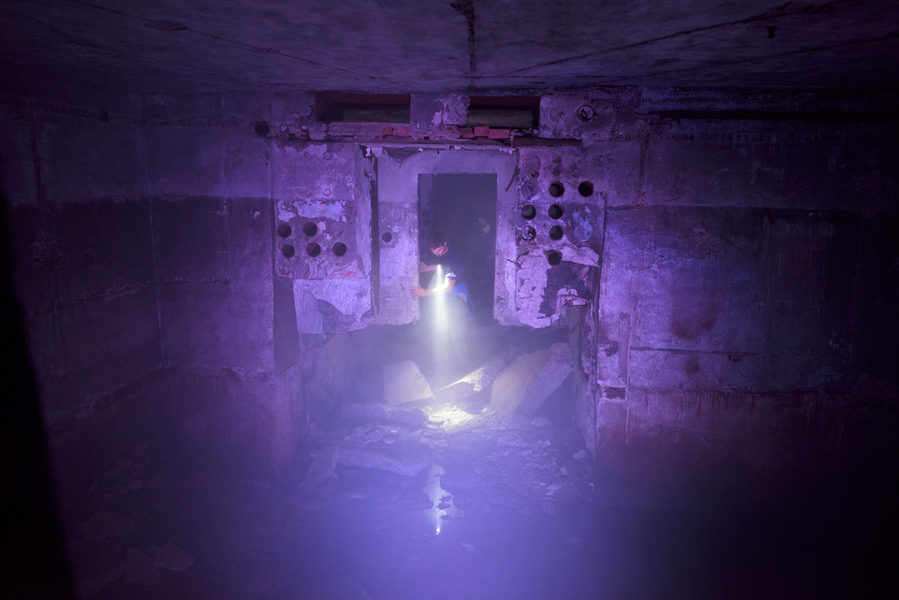 KYIV, Ukraine — "Quest" is a massive scavenger hunt that blends urban exploration with online cooperation and logic puzzles. Typically, players search vast areas for hidden codes that they then input into their smartphones. Finding a sufficient percentage of the codes hidden in each "level" unlocks the next location, sending the teams scrambling back to their cars. All-night season-finale games, like the ones shown here, begin in the early evening and finish the next morning, often traversing hundreds of kilometers in the process.

A player searches an abandoned missile silo for hidden codes while "Chumbawumba" thunders from a speaker and a purple strobe light provides illumination during the final stage of a game titled “10 Years of Cereberal Coitus” (10 лет церебрального коитуса) in the early morning hours of September 6, 2015, in Zhitomyr Oblast, Ukraine. The partially-flooded silo contained R-12 (SS-4) ballistic missiles during the Cold War.​ The game was organized to celebrate the 10-year anniversary of the organizing team, Peugeot Pride. 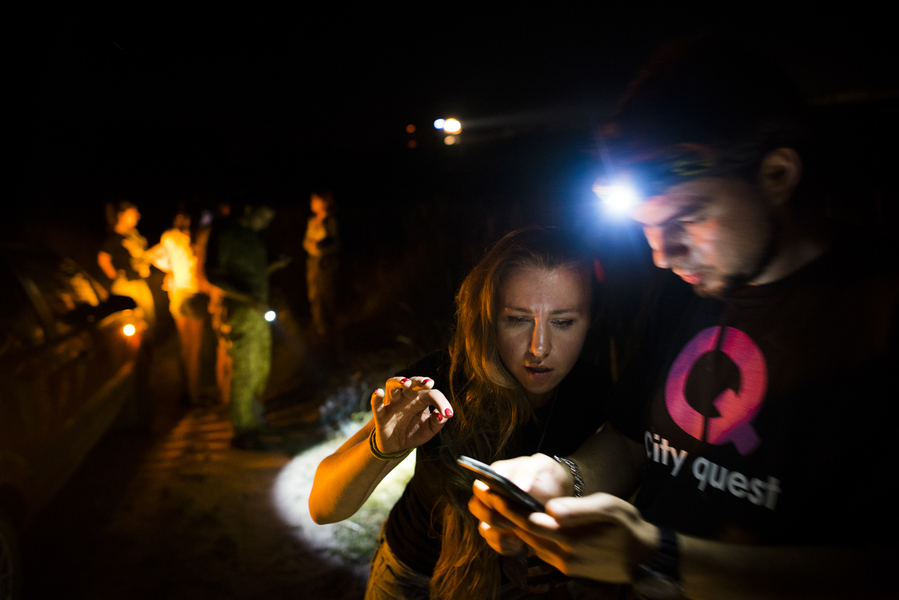 Lusya and Max, two game organizers with a team called City Quest, check on teams' progress shortly after midnight on July 26, 2015 in Vorzel, Ukraine​. This game, "Hard City Quest 7: Emerald City" was the most difficult game produced by City Quest during this season, and had a narrative loosely based on the Wizard of Oz. 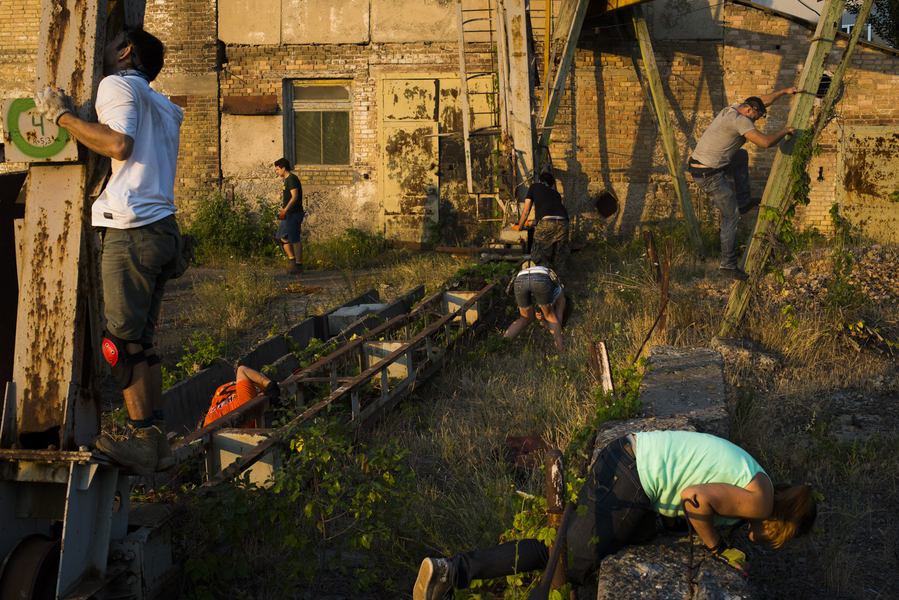 Members of different teams scour an abandoned plant during the tenth and final level of Hard City 7, looking for small written codes as the sun rises on July 26, 2015 in the suburbs of Kyiv. To complete this level and finish the game, teams needed to locate 35 out of 50 hidden codes using, markers written in green to guide them. At left, a marker can be seen indicating that there are three codes within a five-meter radius. 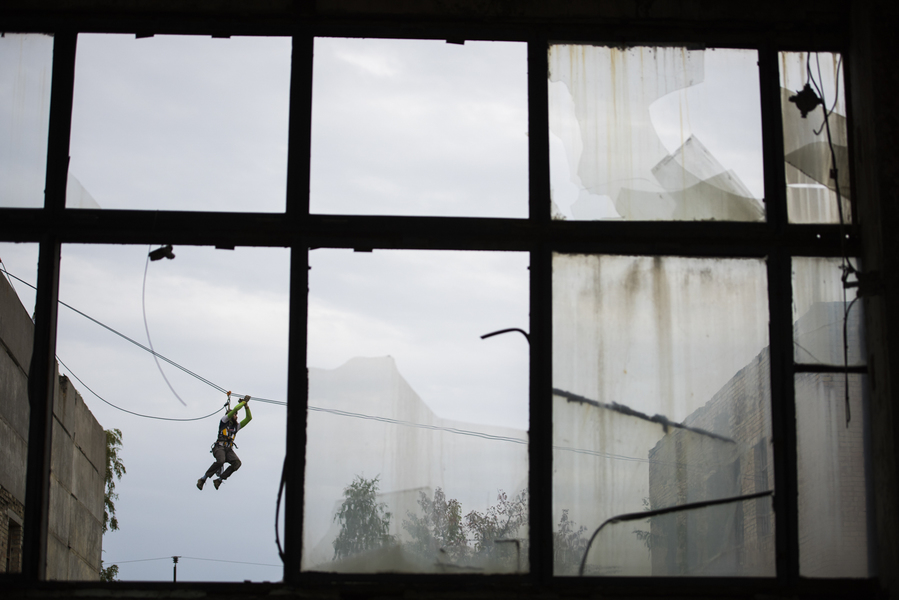 A player ziplines from a roof into a window of an adjacent building, thereby completing one of the tasks set forth by the game's organizers, at an abandoned plant on September 5, 2015 near Ivankiv, Ukraine. Ivankiv is about 50km south of Chernobyl. 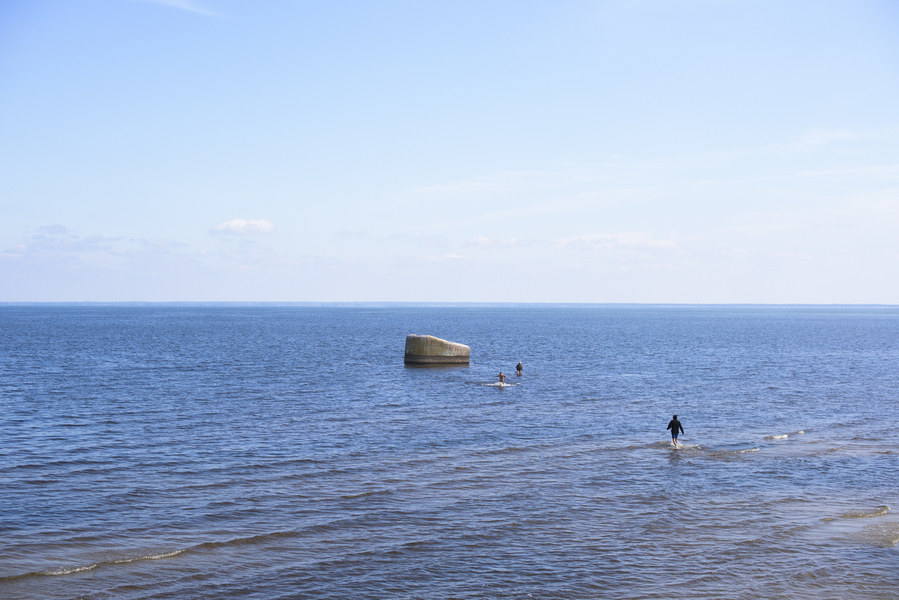 Having shedded most of their clothes, players wade out to flooded ruins in the 'Kiev Sea,' a large reservoir on the Dnieper River, on September 5, 2015 north of Kyiv, Ukraine. Inside the structure, players found a submerged code formed of LED lights that unlocked the next phase of the game. 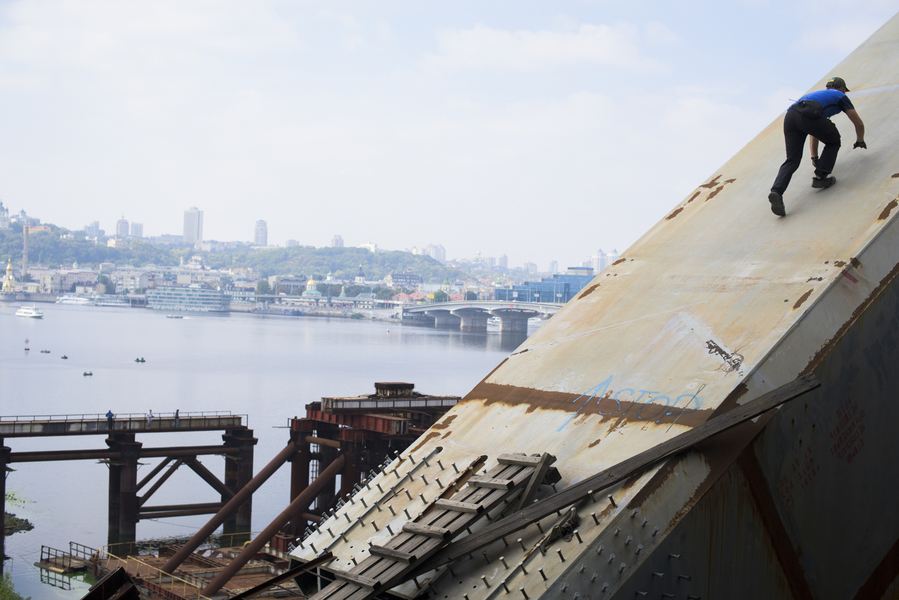 A player scales an arch of the unfinished Podilsko-Voskresensky Bridge on September 5, 2015 in Kyiv. Organizers of this game gained access to the site by bribing a guard with a liter of beer. The player in this photo failed to notice the "stop" sign spraypainted below him—organizers try to help players avoid unnecessary risks by marking some areas off limits. 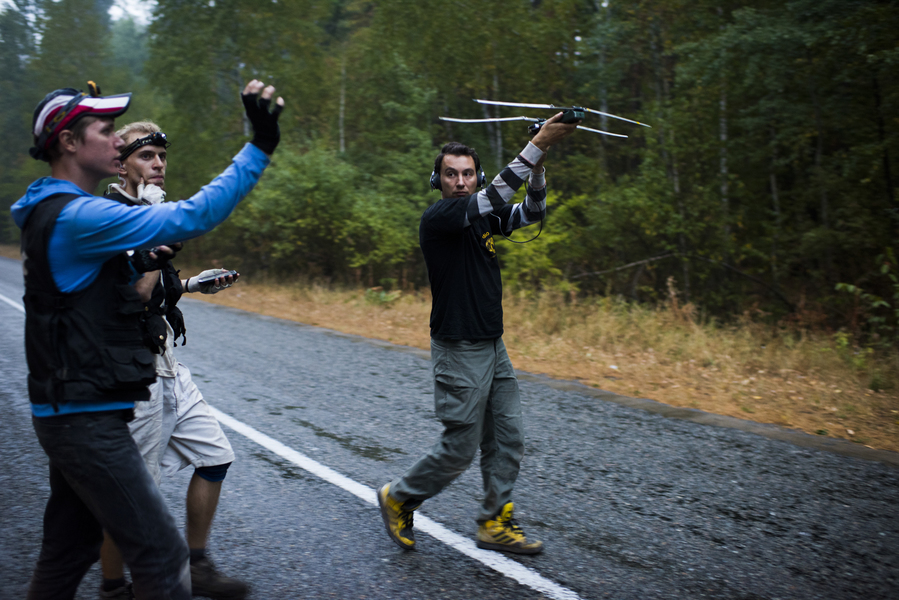 A player named Dio uses a directional antenna to search for transmitters hidden in a forest on September 5, 2015 in a rural area of Zhyrtomyr Oblast, Ukraine. This skill is part of a sport called "fox hunting," and this segment of the game was explained to players by the coach of Ukraine's National Team. 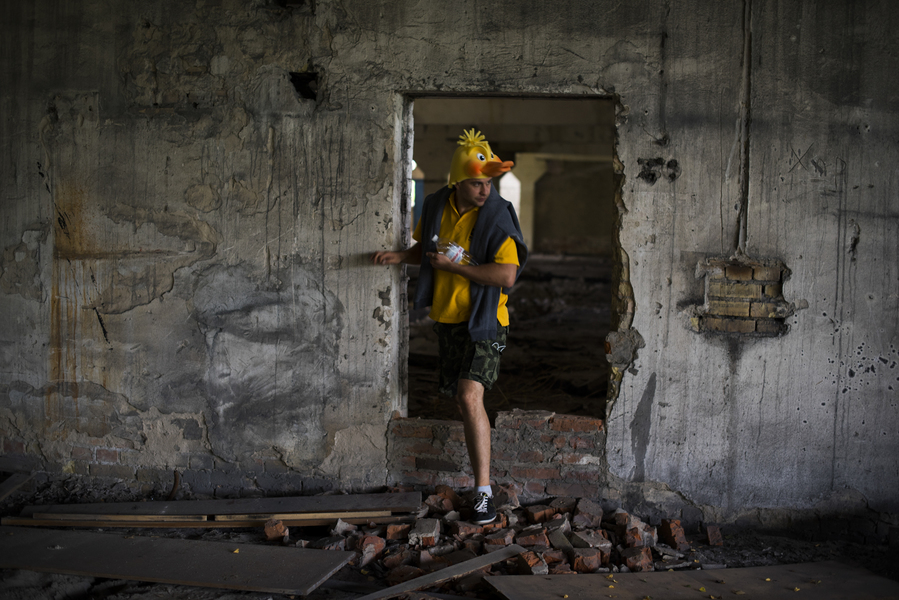 Andrew, one of the game's organizers, dons a duck costume as he moves through an abandoned flax factory on September 5, 2015 near Ivankiv, Ukraine. Andrew is participating in a so-called "agent task" - where players must interact in some way with an organizer who is usually in character. The solution to this stage of the game involved the word "anatidaephobia" - which, according to the internet, is the irrational, pervasive fear that a duck is watching you. 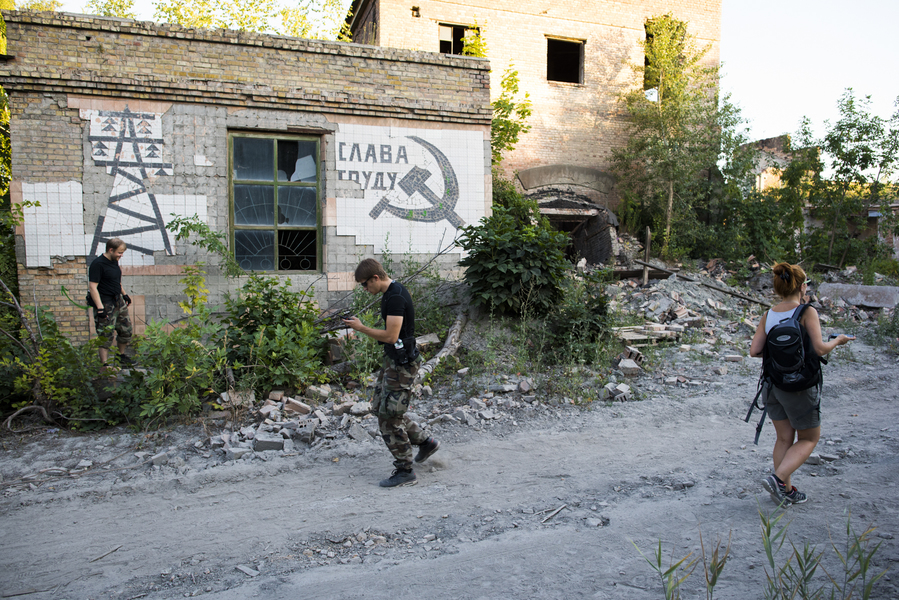 Players search an abandoned Soviet-era concrete plant for codes on July 25, 2015 near Irpin, Ukraine. The Russian text next to the hammer and sickle reads "Glory to Labor." 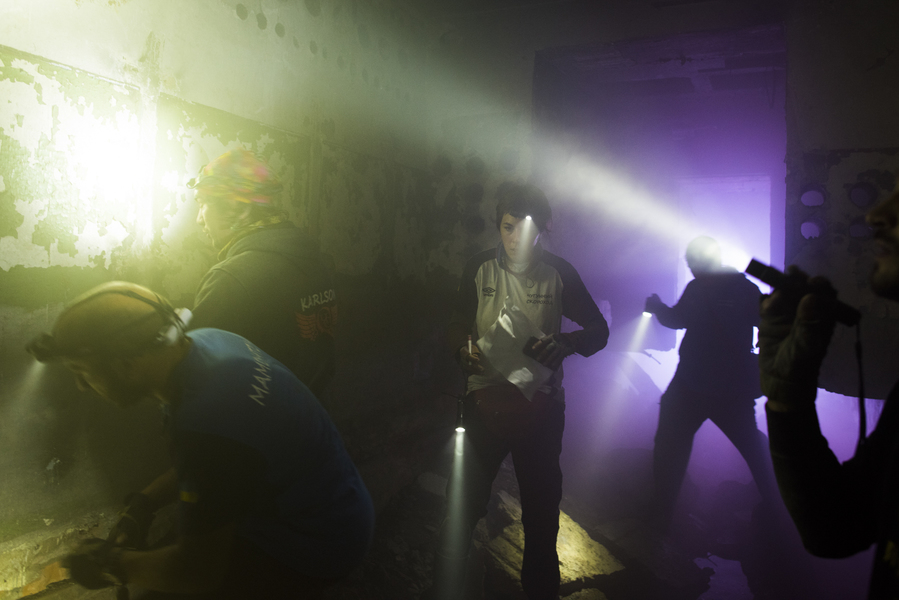 Players search an abandoned missile silo for hidden codes during the final stage of a 19-hour game in the early morning hours of September 6, 2015 in Zhytomyr Oblast, Ukraine. The partially flooded silo contained R-12 (SS-4) ballistic missiles during the Cold War. 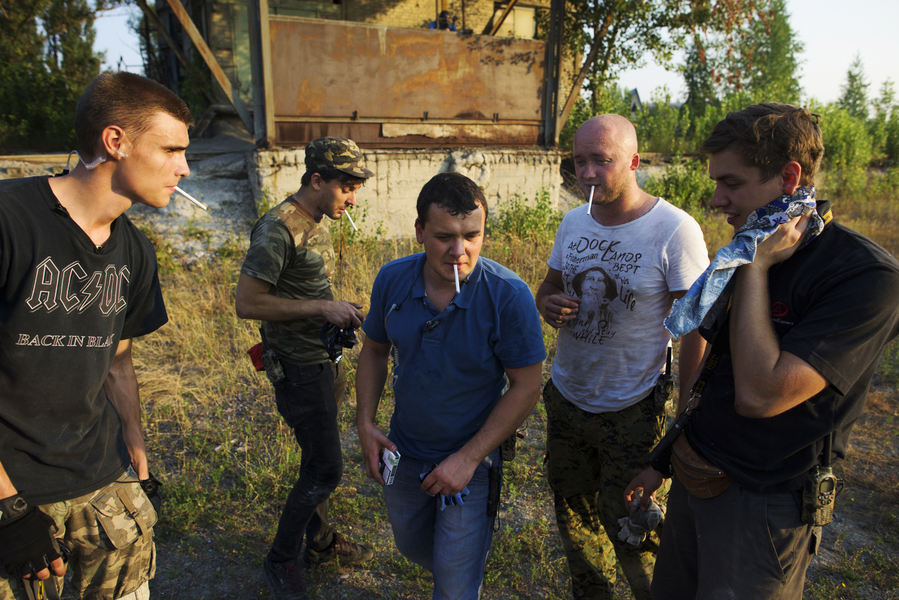 A team lights celebratory cigarettes having completed the final stage of a "Hard City Quest 7: Emerald City" at dawn on July 26, 2015 in the suburbs of Kyiv, Ukraine. 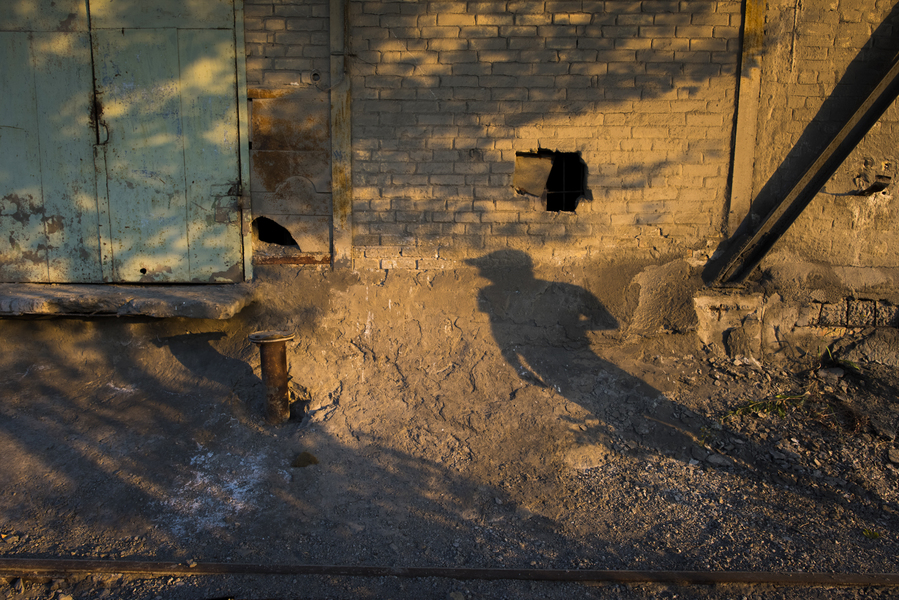 A player casts a shadow at an abandoned plant at dawn on July 26, 2015 in the suburbs of Kyiv, Ukraine. 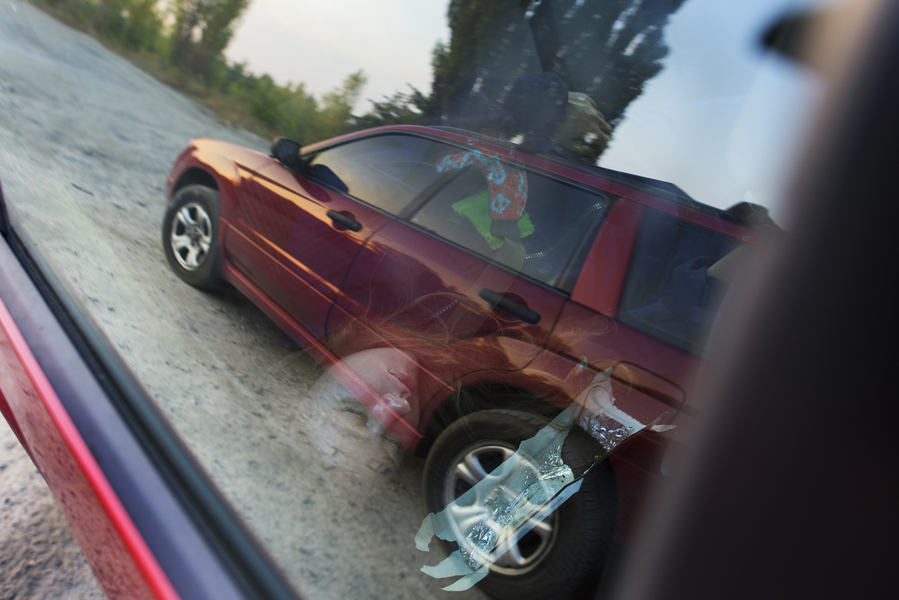 Lusya, one of the game's organizers, sleeps in a car near the end of "Hard City Quest 7: Emerald City" on July 26, 2015 near Kyiv, Ukraine. This game began at 6pm the previous evening and lasted more than 12 hours. 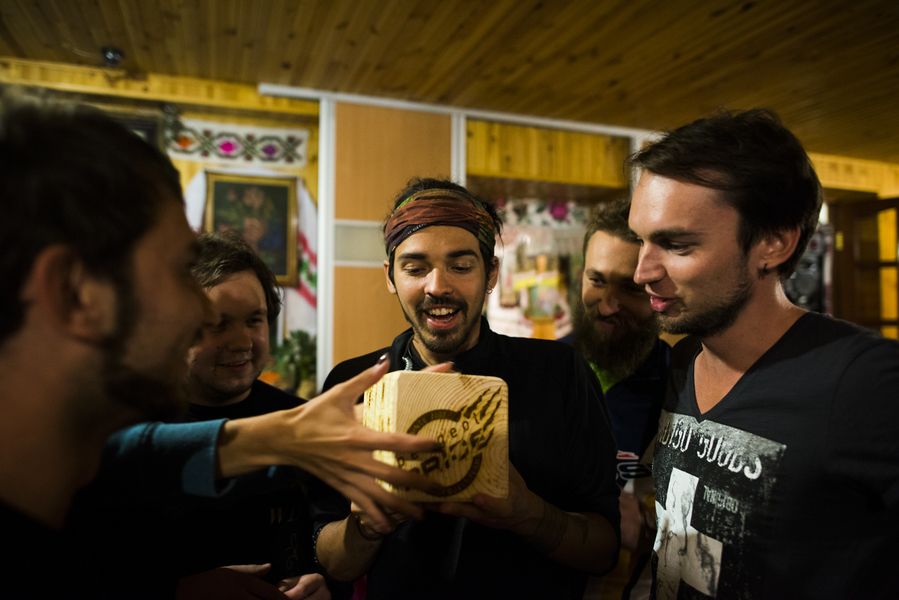 Regis, a member of WDG, the winning team, receives a trophy following a 19-hour game in the early morning hours of September 6, 2015 in Zhytomyr Oblast, Ukraine. Players and organizers met at a small restaurant near the last level to award prizes, swap stories and eat food in the pre-dawn hours following the conclusion of the game.